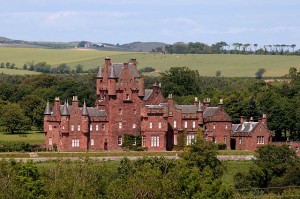 The 19th-century Ayton Castle’s grounds will be home to 188 solar panels, providing 50KW of electricity, after Scottish Borders Council approved the plans by the castle owners.

The special high-level mounting system means livestock can still graze the fields unprotected under the panels.

According to thenational.scot, Director of conservation charity WWF Scotland Lang Banks said: “Due to their age and construction materials, historic buildings can often be quite a challenge when it comes to trying to reduce energy use and cutting carbon. So while energy savings efforts should still be made, choosing to generate your own on-site renewable energy too makes perfect sense.”

Last week, the first large-scale solar project in Fife was also given the go-ahead, with a total of 11,000 panels planned for sites at Tayport, Wormit and Crail.

The largest of the sites at Tayport will house 5000 panels at the start of October.

As well as the development at Ayton Castle, plans have been submitted for a monster 40,000-panel site.

Posted by roxana on Oct 20 2015. Filed under _featured slider, Europe, WORLD. You can follow any responses to this entry through the RSS 2.0. You can leave a response or trackback to this entry