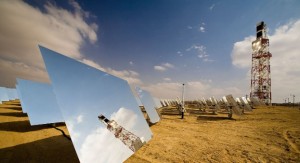 50,000 lithium-ion rechargeable battery packs will be supplied by Tadiran Batteries to BrightSource’s 121 MW Shalim Thermal Solar Power Station in Israel. These batteries have been designed to last 25 years, even in harsh environments. Tadiran is a subsidiary of the better-known Saft Group.

According to solarlove.org, BrightSource Energy, Alstom, and NOY Infrastructure & Energy Investment Fund are partners in the thermal solar station project. Oakland, CA–based BrightSource will be the provider of the concentrating solar power technology that some call a “solar power tower.”

Over 50,000 computer-controlled heliostats — which function like mirrors — will be combined with the tower that is over 200 meters tall to generate electricity. The Tadiran battery packs will be used to help manage these controllable mirrors, which track the sun on two axes. Using batteries instead of expensive cabling reduces the overall project cost.

This CSP plant will generate copious amounts of steam to turn turbines that generate electricity. It has been estimated that when the thermal solar plant is operational, it will generate enough electricity to power about 120,000 homes in the area. The construction site is the Negev desert, and up to 1,000 jobs will be created by the project.

Igal Carmi, President and CEO at Tadiran Batteries, explained, “We are proud to have been selected by BrightSource Energy to supply our state-of-the-art range of rechargeable lithium-ion battery systems for this innovative project. Awarded by a new client in a new sub-segment of energy harvesting, this order represents a significant commercial breakthrough for Tadiran and highlights the recognition by the industry for the excellence of its batteries.”

This project is exciting for a number of reasons. You can imagine how much sunlight is available in an Israeli desert, so it makes no sense not to utilize some of it. Secondly, battery technology is being used and this type of technology is beginning to emerge as a clean energy solution in a number of settings. Thirdly, the potential to provide electricity to well over 100,000 homes from one clean energy source is remarkable. Israel is also considered to be a technology leader, so it “makes sense” that clean energy technology would take root there.

Posted by roxana on Oct 19 2015. Filed under _featured slider, INDUSTRY, Solar Thermal. You can follow any responses to this entry through the RSS 2.0. You can leave a response or trackback to this entry