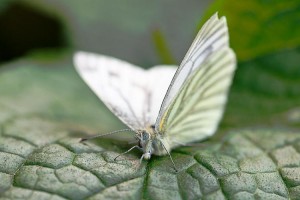 How butterflies are revolutionizing solar power. Image via gillianplummerphotography.co.uk

The Cabbage White Butterfly, also known as the Cabbage Moth, is the bane of farmers and vegetable garden ownerers. However, some of its attributes may lead to more efficient solar panels.

Cabbage Whites are able take flight before other butterflies on cloudy days – and it’s all in the unique way they use their wings.

According to Energy Matters, a team of researchers from the University of Exeter found the optimal angle for the butterfly to hold its wings to increase its body temperature (known as reflectance basking) was around 17 degrees, which increased the moth’s body temperature by 7.3 degrees Celsius compared to horizontal.

The team have demonstrated that by mimicking the v-shaped posture assumed by Cabbage White butterflies to heat up their flight muscles, the amount of electricity by solar panels can increase by almost 50 per cent.

The researchers also state by replicating the simple mono-layer of scale cells found in the butterfly’s wings, it could dramatically improve the power-to-weight ratios of future solar concentrators – up to 17-fold – making them much lighter and consequently more efficient.

“This proves that the lowly Cabbage White is not just a pest of your cabbages but actually an insect that is an expert at harvesting solar energy,” said Professor Richard Ffrench-Constant, an expert in butterfly mimicry.

The team, from the Environment and Sustainability Institute (ESI) and the Centre for Ecology and Conservation based at the University, have released a paper on their research; White Butterflies As Solar Photovoltaic Concentrators.

“Biomimicry in engineering is not new. However, this truly multidisciplinary research shows pathways to develop low cost solar power that have not been done before,” said Professor Tapas Mallick, lead author of the paper.

Butterflies and moths have inspired other solar related research. The atomic structure of a moth’s eye has played a role in creating new water-repelling, anti-reflective glass coatings that could increase the efficiency of solar panels. Moth eye structure has also been used to create anti-reflective films.

The Swallowtail Butterfly has incredibly black wings and a unique scale structure that absorb a great deal of sunlight. Its attributes have been used to extract hydrogen from water.

Posted by roxana on Aug 3 2015. Filed under _featured slider, Solar PhotoVoltaics. You can follow any responses to this entry through the RSS 2.0. You can leave a response or trackback to this entry