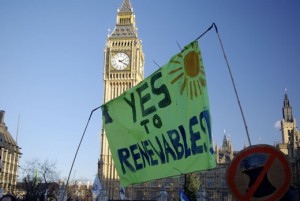 According to the data released by the Department of Energy and Climate Change, renewables produced more power than coal plants for full three-month period for the first time in the United Kingdom.

The government statistics reveal that over the second quarter of 2015 the total share of electricity generation that came from renewable sources increased to a record high of 25%, Wired.co.uk has reported.

Experts believe this is due to an increase in wind turbines and solar panels being installed over the past 12 months, as well as more favourable weather conditions.

But although on the surface these statistics appear to be promising, according to projections from the European Commission, the UK continues to be one of the lowest ranking countries in the European Union when it comes to the percentage of energy consumed that is produced by renewables.

Most of the UK’s renewable energy is produced with biomass and waste systems (61.7%) and wind energy (29.1%), with hydropower and solar energy still lagging far behind several other countries in northern Europe.

The new data has also come at a time when the future of renewable energy funding in the UK is facing considerable uncertainty; there has been growing concern in recent months that the UK’s renewable energy efforts are likely to be cut short after Conservative ministers called for subsidies to be redistributed.

Posted by roxana on Sep 28 2015. Filed under _featured slider, INDUSTRY, Solar PhotoVoltaics, Wind. You can follow any responses to this entry through the RSS 2.0. You can leave a response or trackback to this entry

1 Comment for “Clean energy outdoes coal in the UK”