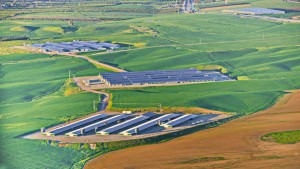 Las week, Israel inked a $1 billion deal to build what will become the second 121-megawatt solar power plant under construction on a swath of country’s southern Negev desert.

When completed in early 2018, the two plants, along with a smaller 30-megawatt photovoltaic plant slated for the site, will provide 2 percent of the country’s total electricity production. Israel has a target of getting 10 percent of its electricity from renewable sources by 2020.

According to Climate Progress, the Israeli Finance Ministry said the overall site, named after the nearby town of Ashalim, will be the biggest of its kind in the world, and will have electricity storage options on top of solar power generation.

The 121-megawatt Megalim Solar Power Ltd. project is already under construction and is expected to be completed by 2017. The newly financed project — to be built by Abengoa, a Spanish firm that focuses on innovative technologies in sustainability, and the Israeli global infrastructure group Shikun & Binui — is expected to break ground next month. It is being financed by the Overseas Private Investment Corporation and the European Investment Bank as well as several local commercial banks.

The newly financed solar park will produce energy for more than 69,000 households, and prevent 463,000 tons of carbon dioxide emissions annually.

“This agreement is a milestone for renewable energy projects in the country,” said Yariv Nehama, deputy accountant general for the Finance Ministry. “The project is unusual in its scope and technological innovation, which combines capacity with energy storage.”

The reflected sunlight then heats a fluid, such as molten salt, that runs a generator which creates electricity. The Ashalim plant in Israel will be able to use the molten salt — salt that has been turned into a liquid due to high heat — to store thermal energy for 4.5 hours.

The International Energy Agency’s (IEA) 2014 CSP Technology Roadmap determined that CSP has a promising future due to its cheap and efficient storage qualities, and that 11 percent of global electricity will be generated by concentrating solar thermal power in 2050.

While growth of CSP has been slower than expected — in many ways due to the rapid drop of the cost of PV power — CSP has started to see significant growth.

In Israel, a sun-soaked desert country, solar power has been slow to catch on in large part due to the recent proliferation of natural gas, two large offshore reserves of which were discovered in the last decade.

Since 2011, natural gas has gone from providing about a third of Israel’s electricity to around half. As the Wall Street Journal recently reported, after the offshore gas reserves were discovered, the government stopped approving the addition of new solar projects to the grid.

Right now renewable energy only makes up about 2 percent of Israel’s electricity supply, far short of the 10 percent by 2020 goal.

The Israeli government expects electricity demand to double within the next 20 years due to population growth, higher living standards, and climate change that will create a need for more air conditioning.

“Israel has all the conditions necessary to lead to an advanced climate policy: We have gas, sun, financing and brains that know how to find solutions,” Environmental Protection Minister Avi Gabai said earlier this month. “Our plan will leverage all of these advantages to create a growth engine for the economy, and the technology developed here will provide solutions for dealing globally with climate change.”

Posted by roxana on Jul 21 2015. Filed under _featured slider, INDUSTRY, Solar PhotoVoltaics. You can follow any responses to this entry through the RSS 2.0. You can leave a response or trackback to this entry