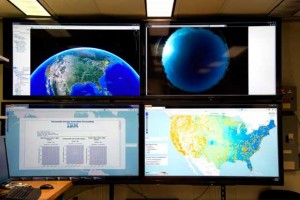 IBM’s SMT system uses weather patterns gleaned from thousands of data points and predict how much solar and wind power will be available weeks in advance. Credit: IBM via Computer World

IBM has developed a computer system that can learn about weather from thousands of data points and predict days — even weeks — in advance how much power from solar and wind farms will be available for the U.S. power grid.

According to Computer World, the new system is as much as 30% more accurate than today’s state-of-the-art weather prediction systems used by organizations such as the National Weather Service, according to the National Renewable Energy Laboratory.

“It’s providing a forecast for solar, wind and other environmental parameters. It learns from solar plants [and] weather stations, and constantly adjusts and improves the forecast,” said Hendrik Hamann, Research Manager at the IBM T.J. Watson Research Center.

Because the system can better predict how much renewable energy will be available, the nation’s power grids are better able to integrate that electricity with traditional forms of power.

“The more data you put in, the smarter it gets,” said Hamann.

The SMT system continuously analyzes data to learn from and improve renewable energy forecasts. The data is derived from thousands of weather models around the continental U.S., as well as weather satellite images and images from cameras mounted at wind and solar farms that watch the sky for weather patterns.

In contrast, most current forecasting techniques rely on individual weather stations that offer a narrower view of the variables that affect the availability of renewable energy.

“By continuously training itself using historical records from thousands of weather stations and real time measurements, IBM’s system combines predictions from a number of weather models with geographic information and other data to produce the most accurate forecasts — from minutes to weeks ahead,” Siyuan Lu, Physical Analytics Researcher at IBM, said in a statement.

Today, only about 5% of U.S. electricity is generated from wind and solar resources, but the amount of power from renewables is growing rapidly.

Solar power, for example, is predicted to supply as much as 14% of the nation’s power in just 15 years and 27% by 2050. Currently, about 65% of U.S. power is derived from fossil fuel-generated power, such as coal, according to the U.S. Energy Information Administration (EIA).

Over the past two years, solar energy has been the second-largest source of new electricity generating capacity in the U.S., exceeded only by natural gas.

As the amount of solar and wind capacity continues to grow, it’s critical for regional power grids to know how much renewable electricity they’ll have in advance to better plan their capacity needs.

Power from traditional sources, such as fossil-fuel power plants and hydroelectric dams, is relatively stable and easy to predict. Renewable power, however, is at the whim of the weather; clouds, humidity and wind can affect how much renewable energy is generated from solar and wind turbines.

IBM’s SMT system takes in new data every 15 minutes, allowing it to predict and then inform ISOs how much energy is likely to be produced from solar and wind farms.

“By improving the accuracy of forecasting, utilities can operate more efficiently and profitably,” said Bri-Mathias Hodge, who oversees the Transmission and Grid Integration Group at the National Renewable Energy Laboratory (NREL), a collaborator in the SMT project. “That can increase the use of renewable energy sources as a more accepted energy generation option.”

Posted by roxana on Jul 17 2015. Filed under _featured slider, BUSINESS, Market News. You can follow any responses to this entry through the RSS 2.0. You can leave a response or trackback to this entry