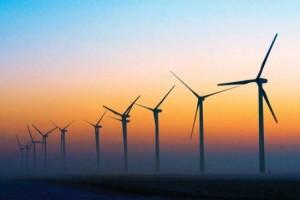 Wind turbines are not linked to health complaints, study says. Image via power-eng.com

Groundbreaking research from Germany on low-frequency “infra­sound” adds to the recent body of work that is challenging wind energy proponents’ insistence that turbines are not linked to health complaints reported by those living close by.

According to The Australian, the international project led by the National Metrology Instit­ute of Germany (PTB) concludes that exposure to infrasound below the range of hearing could stimul­ate parts of the brain that warn of danger. It finds that humans can hear sounds lower than had been assumed and the mechanisms of sound perception are much more complex than previously thought.

The researchers do not claim the results are definitive regard­ing wind turbines and health impacts, and say more work is needed.

But the research builds on recen­t work in Japan and Iran — and investigations by NASA dating back to the 1980s — that suggests the health science of wind energy is far from decided and would benefit from further inquiry, though it is unlikely to persuade prominent wind farm advocate, Simon Chapman.

Dr Chapman, who did not respond to questions from The Australian about the German work, told a Senate inquiry into wind farms and health last month that he was not persuaded by other recent­ research.

“I believe there is much evidence that belief in the harms of wind farms is the cause of harm from wind farms and that those who are intent on spreading this fear are largely responsible for that harm,” he told the inquiry.

The Clean Energy Council was unavailable to comment. But others in the renewables industry say they are open to further inquiry.

Oliver Yates, the chief executive officer of the Clean Energy Finan­ce Corporation, which has less than 20 per cent of its portfolio invested in wind farms, said that “environmental considerations” were critical in any project.

Asked at a conference in Sydney yesterday if the corporation was concerned about increased health risks, he replied: “I encourage any necessary additional support or research people feel that they need to have in relation to this matter to get clarity and satisfaction within their own mind.”

The National Health and Medical Research Council is currently reviewing the evidence on wind turbines and health. The Australian Medical Association will review its position on the issue once the NHMRC reports. Until then, its position is that available Australian and international evidence does not link adverse health effects to wind farms.

The AMA’s vice-president, Geoffrey Dobb, said there was “no accepted physiological mechanism where sub-audible infrasound could cause health effects”.

The German study suggests the impact of very low frequency noise on some people is poorly understood. Scientists in Japan measured brain function and reported last year that it showed the brains of Japanese wind turbine workers could not achieve a relaxed state.

In a similar vein, a study of 45 people in three groups by Tehran University, published earlier this year, said “despite all the good benefits of wind turbines, it can be stated that this technology has health risks for all those exposed to its sound.”

Work by Neil Kelley and NASA in the 1980s on early model wind turbines found impacts from infrasound and led to design changes.

As the number and size of wind turbines has increased, the number and spread of complaints has also grown. The German research says infrasound is pervasive and generates from an increasing number of sources, including renew­able energy sources such as wind parks and heat pumps.

“Although commonly declared as ‘non-audible’, the number of complaints about infrasound expos­ure has been increasing expon­entially in Germany and also in other countries serious problems exist,” the research paper says.

“We think this is a contribution to the many questions we have within this field but it is too early to conclude seriously about wind turbines­ and their impact,” Dr Koch said.

Test subjects were asked to describe their experience and their brain responses were measured using magnetoencephalography and functional magnetic resonance imaging technologies.

The results showed that human­s could hear sounds of eight hertz, a whole octave lower than had been previously assumed, and that excita­tion of the primary auditory cortex could be detected down to this frequency.

A PTB report on the research findings said all participants had explicitly stated that they had heard something.

Clinical observations showed a reaction in certain parts of the brain which play a role in emotions. “This means that a human being has a rather diffuse perception, saying that something is there and that this might involve danger,” Dr Koch said.

PTB said the wind energy sector and authorities had often tried to appease concerns of health impacts from wind farms by declaring that the sounds generated were inaudible and too weak to be the source of health problems.

But Dr Koch said the issue must be taken seriously. “Neither scaremongering nor refuting everything is of any help in this situation,” he said. Investigations were only beginning and further research was urgently needed.

The Australia-based Waubra Foundation has long been recommending independent research into the effects of industrial sound and vibration from wind turbines and other sources. The foundation said the German research had helped “demonstrate objectively and visually via functional MRI scans that an infrasound stimulus triggered physiological responses that were hardwired into the mammalian brain”.

Posted by roxana on Jul 16 2015. Filed under _featured slider, INDUSTRY, Wind. You can follow any responses to this entry through the RSS 2.0. You can leave a response or trackback to this entry