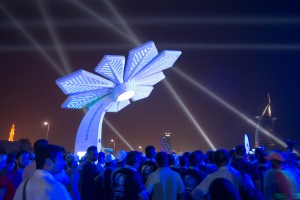 Dubai has recently installed “Smart palms” that store solar energy during the day and discharge power at night.

According to Fast Coexist, Smart Palm, the company, has set up two so far—one on Surf Beach, another in a park near the waterfront. It plans to plant them in 103 locations under a contract with the United Arab Emirates city.

The palms stand about 20 feet high, with solar fronds measuring 194 square feet (18 meters square). There are eight charging points and the palms have Wi-Fi range of 100 meters, according to the company. Less attractively, they also have screens and security cameras.

“For us, it was important to translate the important cultural identity of the date palm from being a plant that provided shelter, building materials, shade and sustenance, to our Smart Palm, designed to provide data, connectivity, energy and all in a sustainable manner,” says Viktor Nelepa, Smart Palm’s founder, in a press release.

In an email, spokesperson Vangel lvanov says the cost is yet to be finalized because the startup will probably be shifting to a 3-D printing manufacturing process.

Of course, you might want to avoid the palms during the day, at least in summer when temperatures get into the hundreds. But they do seem like a useful and playful addition at night, assuming they’re not too expensive.

Posted by roxana on Jul 15 2015. Filed under _featured slider, INDUSTRY, Solar PhotoVoltaics. You can follow any responses to this entry through the RSS 2.0. You can leave a response or trackback to this entry