Solar-Panel Windows closer to reality thanks to Quantum Dot Breakthrough

Solar panels that also work as windows are getting closer to become a fact as a big boost in quantum dot research could imply important ways in which the solar rays are captured in the future. The Los Alamos National Laboratory and University of Milano-Bicocca’s researchers arranged a better way of inserting a new generation of quantum in a thin polymer to capture the sun’s energy. 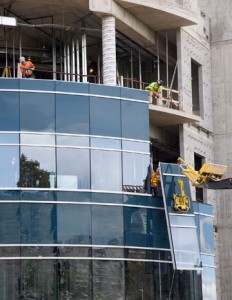 The nanocrystals consisted of semiconductor materials, quantum dots, are being utilized in solar panel systems thanks to the low-cost and mechanical benefits, and transistors, LEDs and lasers also.

“The key accomplishment is the demonstration of large-area luminescent solar concentrators (LSCs) that use a new generation of specially engineered quantum dots,” said Victor Klimov, lead researcher at the Centre of Advanced Solar Photophysics at Los Alamos.

The new discoveries were published in Nature Photonics and they prove that a transparent LSC material is able to harvest and transport solar energy with the help of quantum dots.

“The LSC serves as a light-harvesting antenna which concentrates solar radiation collected from a large area onto a much smaller solar cell, and this increases its power output,” said Klimov.

The harvested light is diverged through the LSC and guided to a tiny solar cell the slab’s edge, that grows the power performance in a way that could have developed applications in future solar cells.

Sergio Brovelli, a researcher involved in the study at the University of Milano-Bicocca, said: “LSCs are especially attractive because in addition to gains in efficiency, they can enable new interesting concepts, such as photovoltaic windows that can transform house facades into large-area energy generation units.”

Posted by admin on Apr 18 2014. Filed under _featured slider, Energy Market, Europe, Market News. You can follow any responses to this entry through the RSS 2.0. You can leave a response or trackback to this entry