The search engine giant takes New Mexico – based Titan Aerospace a company that is producing unmanned, solar-powered jets conceived to fly many years at a time.

The new Google purchase was announced this Monday and Titan Aerospace for a confidential amount in a step that brings the technology giant in a race for the unmanned skies. 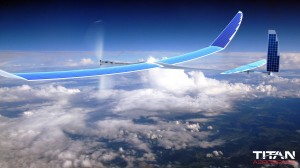 After Facebook’s $20 million acquisition of U.K. – based aerospace company Ascenta – that was developing the unmanned, solar-powered aerial drones for some time – the search engine giant moved quickly to take over the expected bid for Facebook to purchase the Titan Aerospace too.

The company from New Mexico has also been interested in developing solar powered drones made to fly continuously for many years as, a solar science that Google needs to use mainly to expand its prestige and be available in as many places on earth as possible.

Even if the amount that Google paid to a close source said that the technology giant was willing to pay more than anyone from Facebook for the Titan Aerospace. The purchased company only has a staff of 20 people and its location will remain New Mexico to carry on with its work and help Google provide internet in different corners on earth that are currently without cellphone towers or telephone wires.

Solar-powered drones bring an interesting aspect for companies such as Google and Facebook because of the reliability and stability in all kinds of weather conditions, whereas fossil fuel- or battery-powered unmanned aircraft are way more expensive and less promising.

The two companies will work together to provide the material and to design the drone’s components and also to research algorithms that assure an improved traverse wind patterns and flight routes. The purpose is to gather real-time, high quality images of the earth with a lot more details needed for Google Maps but not only.

“It is still early days, but atmospheric satellites could help bring internet access to millions of people, and help solve other problems, including disaster relief and environmental damage like deforestation”, said a Google statement announcing the acquisition.

Posted by admin on Apr 16 2014. Filed under _featured slider, Gadgets, Market News, Solar PhotoVoltaics, Uncategorized, USA. You can follow any responses to this entry through the RSS 2.0. You can leave a response or trackback to this entry