Negotiations between E.U and China are standing still 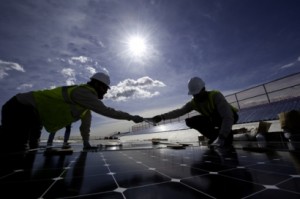 The subject of cheaper Chinese PV important is still a reason of discussion since Beijing is not satisfied with the minimum import price of €0.57/W for modules suggested by E.U.

The European Commission and the Chinese Ministry of Commerce are still negotiating about the import of cheaper crystalline modules, cells and wafers. The two parts didn’t reach a conclusion.

The chance of settling was still possible until the Friday. The Commission was planning to implement a maximum import ceiling of 7 GW on Chinese modules and a minimum module import price of €0.57/W (US$0.76/W).

€0.57 is not a good offer for China because the Asian and European manufacturers who purchase cells from Asia offered acceptable prices before the negotiations. So, the import ceiling compromise of 7GW is not an option either.

The strategy of the Chinese delegation will be negotiated on Sunday and the new offer should be available by the 5th of August.

Posted by admin on Jul 29 2013. Filed under _featured slider, Asia, Energy Market, Europe, Market News, Solar PhotoVoltaics. You can follow any responses to this entry through the RSS 2.0. You can leave a response or trackback to this entry