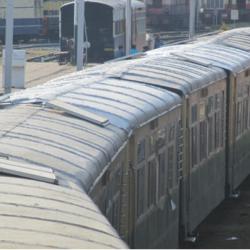 UNESCO heritage Himalayan Queen train from Kalka to Shimla in northern India has become the first train in the world to adopt solar PV panels.

200 W PV modules were fixed on the roof of each of its seven coaches. The generated energy is stored in 2×65 AH Sealed Maintenance Free Tubular 24 V batteries. The engineering marvel took almost a year of trial before being finalized.

The generated energy is used to operate the train. The load drives seven numbers of 6 W LED lights in each of the coaches, besides provision for charging mobile phones during the five-hour journey.

With the PV system and energy efficient lighting in place, a 3 KW alternator, flat belts, regulator rectifier unit, axle pulleys, alternator pulleys and flooded batteries were removed from the underframe of the coach. Thus, they were made more lightweight and speed was increased.

However “dynamic coach balancing”, which was of paramount importance, was a challenge that was successfully mastered by the engineers.

Posted by solar-magazine.com on Aug 20 2012. Filed under _featured slider, INDUSTRY, Technology. You can follow any responses to this entry through the RSS 2.0. You can leave a response or trackback to this entry