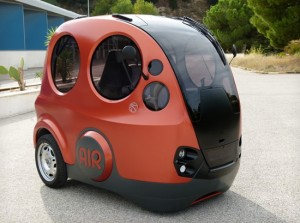 Gas powered cars might have been the best way to get around in the past but with the dawn of alternative energy sources, fossil fuels could pretty much turn obsolete, paving the way for greener and more eco-friendly cars like this new development by Tata.

Barely a looker though sincerely green at heart, the AirPod powers up with nothing but air!

Using compressed air to its advantage, this three-wheeled one-seat ride from the Indian car manufacturers stables is capable of touching speeds of up to 43 miles per hour and packs a tank full of compressed air on board that requires refilling.

Also, the AirPod sports an electric engine that can alternatively be used to pump in air from the outdoors, which in turn is powered by regenerative breaking.

A development that could change the way we travel forever, the tiny AirPod is bound to grab tons of attention.

Posted by solar-magazine.com on Aug 16 2012. Filed under _featured slider, MARKETING. You can follow any responses to this entry through the RSS 2.0. You can leave a response or trackback to this entry