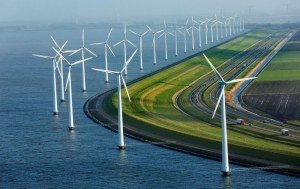 Denmark successfully produced an astonishing 42% of its power from wind turbines in 2015, the highest proportion ever produced by any country.

According to mic.com, the figure exceeds 2014’s figure of 39%, which also set a record for national proportion of domestic energy generated via windmill. News agency Ritzau says Danish state electrical provider Energinet confirmed that in 1,460 of 8,760 hours during the year, windmill production actually exceeded the domestic power requirements of the country.

As a clean and renewable energy source, wind turbines are likely to become an important element of long-term climate and energy planning and in many countries already have.

Denmark’s successful harnessing of wind energy is the outcome of meticulous long-term investment by the country’s government. Its 7,314 miles of coastline are ideal for wind generation.

“It’s first country to build massive offshore wind parks and has an ambitious plan to run 100 percent on renewable energy by 2050: no oil, coal, or gas for electricity, heat, or even transportation,” NPR’s Lisa Desai reported in December. “The plan was set in motion in Denmark’s capital, Copenhagen, 40 years ago — not because of global warming, but because of the 1973 Arab oil embargo. With 99% of its energy then coming from the Middle East, Denmark decided to pursue energy independence.”

In the United States, wind is one of the fastest-growing energy sectors, an extended boom in U.S. wind energy may soon result in wind technology producing 4.5-5% of the country’s entire electrical supply — far behind Denmark, but significant as a measure of overall investment in a country traditionally dominated by dirty fuels.

Posted by roxana on Jan 20 2016. Filed under _featured slider, INDUSTRY, Wind. You can follow any responses to this entry through the RSS 2.0. You can leave a response or trackback to this entry