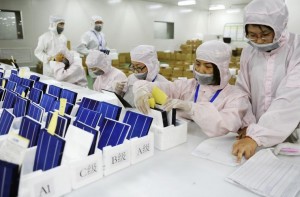 The two sides were involved in a major dispute over trade measures on solar panels imported from China, before eventually reaching deals on minimum import prices and quotas on Chinese imports in 2013.

The European Commission started an expiry review of the anti-dumping duties on imports of crystalline silicon photovoltaic (PV) modules and cells from China.

According to unionoracle.com, EU ProSun, an association of solar power equipment manufacturers, says such commission reviews typically take up to 15 months, which would mean the measures will likely stay in place through the end of next year.

The EU said in the statement that the partial interim review will consider whether or not it is in the EU’s interest to maintain the measures that are now in force.

Following a request lodged by EU ProSun on September 4, 2015, the commission now will work to determine whether the expiry of the measures would result in a continuation or recurrence of dumping of China-made crystalline silicon PV modules.

In Saturday’s statement, an official with MOFCOM’s Trade Remedy and Investigation Bureau said that the implementation of the agreed measures has been relatively “smooth”.

Shen said that the booming domestic market has benefited Chinese solar-panel makers as they continue to expand into overseas markets.

According to MOFCOM, the EU’s PV installed capacity dropped significantly to 7 GW in 2014, compared with 24 GW in 2012, and its share of the world’s total capacity fell to 14.5 percent from 74 percent.

Though China’s overall exports to the EU have declined in recent months because of the sluggish economy there, “disputes” in one industry will not affect the overall trade relations between China and the EU, Lin Guijun, vice president of the University of International Business and Economics in Beijing, told the Global Times Saturday.

“The overall trade ties between China and the European Union are generally positive”, Lin said, noting that cooperation in other areas such as food, autos, and high-tech is getting stronger.

Posted by roxana on Dec 8 2015. Filed under _featured slider, INDUSTRY, Solar PhotoVoltaics. You can follow any responses to this entry through the RSS 2.0. You can leave a response or trackback to this entry