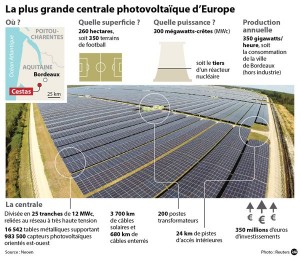 The biggest photovoltaic power plant of Europe, having a power capacity of up to 300 MWp peak, which is the annual electric consumption of 300.000 people, was inaugurated on Tuesday to Cestas, near Bordeaux in France.

According to Middle East News Service, a project worth 360 million euros run by Neoen, a company which five years ago was just a start-up and today is one of the most dynamic players in the renewable energies field.

While the COP21 opened in Paris, this power plant takes up an area of roughly 250 hectares, the equivalent of about 350 soccer fields, including a million of solar panels, 5.000 km of cables and 204.000 screwed foundations, make quickly the symbol of the summit.

The 300 MW solar park started feeding energy into the grid already in late October. Developers wanted to acknowledge the importance of renewable energy to the goals of the climate talks going on in Paris (and probably to boost their media coverage as well) by holding the grand opening the same Tuesday the COP21 talks start.

“We will deliver power at an extremely competitive price, similar to wind power, and at any rate cheaper than the cost of power from new nuclear plants,” Neoen Chief Executive Xavier Barbaro told reporters on Tuesday.

Barbaro said the facility’s solar panels are not oriented toward the south, but on an east-west axis, which allows them to produce three to four times more power for the same surface area.

The east-west orientation also allows the panels to produce more power early in the morning and late in the afternoon, which corresponds more closely to French power demand patterns.

He also said while the solar panels are Chinese made, they make up only a minority part of the investment and that the main costs are related to construction, engineering, cabling and electrical equipment, for which there are many competitive French suppliers.

The orientation of panels also allows to produce early in the morning and late during the evening. The sale price of the produced electricity is approximately 105 euros the MWh during 20 years, what makes it one of the most rentable of France.

Posted by roxana on Dec 3 2015. Filed under _featured slider, INDUSTRY, Solar PhotoVoltaics. You can follow any responses to this entry through the RSS 2.0. You can leave a response or trackback to this entry