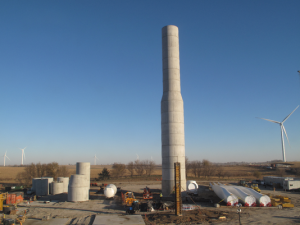 MidAmerican Energy Company will include for the first time a concrete turbine tower at its new wind farm in Adams County in Iowa. Photo source.

MidAmerican Energy is planning to build the tallest land-based wind turbine in the country in Iowa.

According to todesmoinesregister.com, the Des Moines-based power company will get the added height by building the wind turbine tower from concrete instead of steel, a first for the company. The extra 100-plus feet enables the turbine to capture more wind energy, the utility said.

The 2.3-megawatt concrete tower turbine at the Adams County wind farm will measure 377 feet from ground to hub, compared to 263 feet for most of the turbines in use at other MidAmerican wind farms.

With blades extended, the turbine will reach a height of 554 feet, making it about as tall as the Washington Monument.

Siemens and MidAmerican see the prototype as the model for other concrete turbine towers at future wind farms. It would open up “low-to-medium wind resource areas of Iowa for future wind development,” Gehringer said.

The company said the process of building a concrete tower is quite different from the process used to construct turbines with steel towers. “Instead of building the tower sections in a factory and transporting them to the site to be fitted together, crews pour the concrete in segments and manufacture the tower onsite,” Gehringer said.

The concrete turbine is one of 64 wind turbines planned for MidAmerican’s Adams County wind farm. Construction is underway on the 154-megawatt project, and all turbines are scheduled to be erected by the end of 2015.

Siemens sourced the concrete formwork from EFCO Corp. in Des Moines and supplied the wind turbine blades for the entire Adams project from the Siemens blade factory in Fort Madison.

Posted by roxana on Nov 17 2015. Filed under _featured slider, USA, WORLD. You can follow any responses to this entry through the RSS 2.0. You can leave a response or trackback to this entry