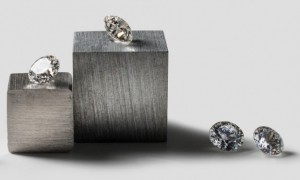 Diamond Foundry, launched last week, was founded by Leonardo DiCaprio with the goal of reinventing the $100B diamond industry from “mine to finger” by setting a new standard for social and environmental good.

“I’m proud to invest in Diamond Foundry Inc. — reducing the human and environmental toll of the diamond industry by sustainably culturing diamonds without the destructive use of mining,” says Leonardo DiCaprio

According to diamondfoundry.com, the founding team of M.I.T., Stanford, and Princeton engineers previously developed pioneering breakthroughs in solar power technology – and had a hunch that techniques used to harness the energy of the sun could also be used to make a better diamond, atom by atom.

“We started by studying the laws of nature. Diamonds are born from a fiery heat, so we set out to create a plasma of unprecedented energy density. We coded software to run tens of thousands of physics-based simulations. In a warehouse just south of San Francisco, we built novel plasma reactors with hundreds of individually precision-engineered parts. Then, we formed plasma as hot as the outer layer of the sun,” says the Diamond Foundry.

The researchers discovered a plasma by which they can attach atoms to an earth-extracted diamond and grow it in size. One by one, the atoms stack on top of a thin slice of earth diamond and extend its unique crystal structure. Layer by layer, it grows into a pure, cultured, jewelry-grade diamond of larger size. After this step, the team slice off and reuse the original any number of times.

“We are now able to produce stunning diamonds in our San Francisco foundry. Each is a unique crystal of pure diamond, just like industrially mined diamonds but morally pure as well.

We use solar power credits to reduce our carbon footprint to zero, and we guarantee the characteristics and provenance of our diamonds: each is born at our foundry in California. The ultimate diamond: 100% pure. 100% ethical. Each unique.”

Posted by roxana on Nov 16 2015. Filed under _featured slider, INDUSTRY, Solar PhotoVoltaics. You can follow any responses to this entry through the RSS 2.0. You can leave a response or trackback to this entry