This camera runs on solar power from the pictures it takes 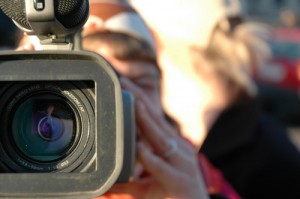 Scientists invented a video camera that is powered by…light. Columbia University researchers have developed a self-powered camera whose pixels both record light and turn it into electricity.

According to engadget.com, the trick is the use of photodiodes (which are common in both cameras and solar panels) that are permanently set to collect energy, not simply conduct it.

As you can see from the blurry, goofy animation below, the existing technology won’t compete with the camera in your phone, let alone a pro DSLR. Columbia’s prototype captures just 1,200 black-and-white pixels, and it needs a lot of light just to keep running.

Even so, it’s promising. If scientists can refine the technology to work at multi-megapixel levels, you could see cameras that last a long time on battery, and might not need a battery at all.

Posted by roxana on Apr 16 2015. Filed under _featured slider, Student, WEB. You can follow any responses to this entry through the RSS 2.0. You can leave a response or trackback to this entry