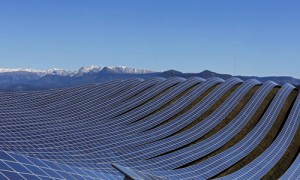 The race for renewable energy has passed a turning point. The world is now adding more capacity for renewable power each year than coal, natural gas, and oil combined. And there’s no going back.

According to Bloomberg, the shift occurred in 2013, when the world added 143 gigawatts of renewable electricity capacity, compared with 141 gigawatts in new plants that burn fossil fuels, says an analysis presented Tuesday at the Bloomberg New Energy Finance annual summit in New York. The shift will continue to accelerate, and by 2030 more than four times as much renewable capacity will be added.

“The electricity system is shifting to clean,” Michael Liebreich, founder of BNEF, said in his keynote address. “Despite the change in oil and gas prices there is going to be a substantial buildout of renewable energy that is likely to be an order of magnitude larger than the buildout of coal and gas.”

The price of wind and solar power continues to plummet, and is now on par or cheaper than grid electricity in many areas of the world. Solar, the newest major source of energy in the mix, makes up less than 1 percent of the electricity market today but will be the world’s biggest single source by 2050, according to the International Energy Agency.

The question is no longer if the world will transition to cleaner energy, but how long it will take. In the chart below, BNEF forecasts the billions of dollars that need to be invested each year in order to avoid the most severe consequences of climate change, represented by a benchmark increase of more than 2 degrees Celsius.

Posted by roxana on Apr 15 2015. Filed under _featured slider, Analysis & Features, BUSINESS. You can follow any responses to this entry through the RSS 2.0. You can leave a response or trackback to this entry