From now on, we can cook without harming the environment 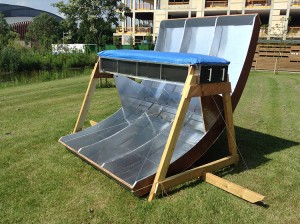 British students made a special oven

A cheap Solar-Powered Oven could take wood’s or coal fuel’s place all over the world.

Nowadays, even with all the technology in our hands, people still cook with the help of wood and coal. Well that has got to change. These fuels are often expensive, produce carbon and lead to health issues. Moreover, they are not sustainable at all as they use wood and we all know we are not planting as many trees as we should.

The newly discovered solar over, developed by four British students, plans to change all this. It is made of 16 foot parabolic dish that harvests solar energy and conduscts it to a cooking box. “It’s a like a greenhouse,” as a student, Keno Mario-Ghae, says. “We have glass around the outside, then a box in the center. That allows us to get the heat in and get it nice and hot, but not let the heat leave.”

The good part of it is the fact that the dish is fixed on a wooden platform that permits it to fallow the sun rays. There are two tubes of water on both sides. One with the counterbalance role and the other leaks at a uniform rate, allowing the dish tilt at about 15 degrees per hour.

When tested, the oven went up to 400 degrees Fahrenheit in 45 minutes, as Mario-Ghae reports. Just enough to bake some bread rolls in not more than an hour.

The purpose of the whole project is to lower the costs and use materials from the area such as old oil-drums. The costs of the device would reach no more than $350 dollars. So a lot cheaper than the existing solar-ovens. The letter reach thousands of dollars when imported to developing countries.” There are a lot of costs you don’t have to deal with if you’re building it in the country where it’s needed,” the student says.

The developers of the project just finished the third year of a manufacturing engineering degree at Cambridge University. They wish to invest in more prototypes and maybe contribute to private projects for people in need. Their project also entered the 2014 Dyson Awards, due in the 7th of August.

Posted by roxana on Jul 31 2014. Filed under _featured slider, INDUSTRY, Technology. You can follow any responses to this entry through the RSS 2.0. You can leave a response or trackback to this entry