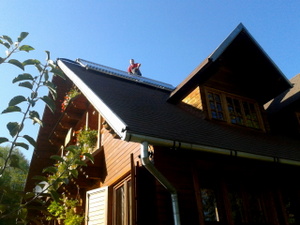 PV industry is gowing thanks to large scale PV

The large-scale PV market is comprised of rooftop projects larger than 100 kW and ground-mounted installations. As the most recent figures from the solar analysts, NPD Solarbuzz , show that large scale solar PV installations toped 26 GW during 2013 and stand exclusively for the annual development of global PV demand from 30 GW in 2012 to 36 GW in 2013.

Germany, India and the United Kingdom gathered with China, the U.S. and Japan in reaching or approaching GW status for large-scale PV added in 2013.

NPD Solarbuzz predicts that this trend approaching large-scale PV will carry on in 2014, and nearly 75% of all new solar PV capacity added will exist thanks to this segment. Furthermore, new PV for emerging solar PV regions will provide more upside potential.

Posted by admin on Jan 15 2014. Filed under _featured slider, Energy Market, Market News, Solar PhotoVoltaics, WORLD. You can follow any responses to this entry through the RSS 2.0. You can leave a response or trackback to this entry