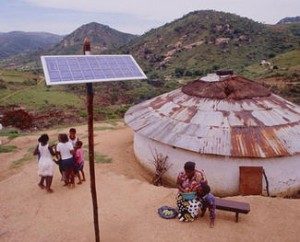 A new PV plant in Africa was conected to the grid

Scatec Solar, an European PV professional, connected a 75 MW solar plant to South Africa’s grid with three months in advance of the deadline. This connection is the first green energy independent power procurement program (REIPPPP) in the country.

The PV system is situated in Kalkbut in South Africa’s Northern Cape region. The project will create over 500 jobs for the locals. Because of the good location, the project is said to produce 135 kWh extra per year. This amount is more that enough for 30,000 houses. Moreover the plant will save 115, 000 tons of carbon emissions per year.

”I am very proud of our staff and contractors who have been able to complete this substantial project three months ahead of schedule, demonstrating how swiftly utility-scale solar energy plants could be built and put into operation” announced Scatec Solar’s CEO, Rayond Carlsen.

The before schedule construction is responsible for a major boom in the local job market. The over 500 employees were trained by the company. 16% of them are women.

”South African authorities are committed to implementing an ambitious renewable energy program, and we find great satisfaction in being able to contribute to its success through our own projects which we have actively been developing in South Africa over the last four years. This country boasts some of the best conditions for solar power in the world and the annual output of 135 million kWh produced at the Kalkbult plant will benefit both the region and the local community in which we operate” in Carlsen’s words.

Posted by admin on Sep 11 2013. Filed under _featured slider, Africa, Energy Market, Market News, Solar PhotoVoltaics. You can follow any responses to this entry through the RSS 2.0. You can leave a response or trackback to this entry