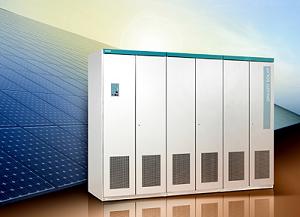 A new set of inverters were presented by Sungrow in this year’s Intersolar.

Sungrow brings three brand new inverters at the exposition after enjoying a great success with the launching of 5-30kW string inverters and the releasing of SG500MX at SNEC 2013 in Shanghai. The new products are: SG800MX, the veiled central PV inverter; SG8/10/12KTL-EC-series string inverter, intelligent residential PV system, and SH10KTL, residential energy storage systems.

The outdoor inverter unit with an 800kW capacity, SG800MX, is one of world’s greatest single-machine power PV inverters. Throughout the stunning surprise elements are the SVG function during night, operation temperature ranges -25℃~+55℃. Moreover, it met German BDEW directives and obtained the certificates for grid-connection in America and Canada. The series to which it belongs have a great deal of amazing features such as: natural cooling function, higher conversion efficiency and lower cost and built-in monitoring system. To sum up, SG800MX is an intelligent residential PV system solution designed for Europe and America.

As for SH10KTL, Sungrow’s newest product for energy storage system of residential PV plant, it has an energy storage function integrated and it can switch seamlessly between grid-connected mode and off-grid mode

And last but not least, SG30KTL, is a wall-mounted string inverter with the largest single-machine power that can be found. This solution was the choice of many Europeans since its launch in 2012. The inverter remarks itself through the granted double “A” results from Photon’s test and VDE-ASIG reliability certificate.

Posted by admin on Jun 24 2013. Filed under _featured slider, Energy Market, Europe, Market News, Solar PhotoVoltaics, USA. You can follow any responses to this entry through the RSS 2.0. You can leave a response or trackback to this entry