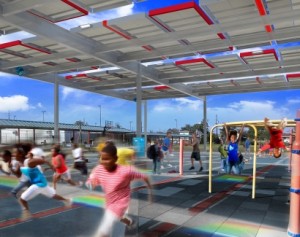 New solar canopy will demonstrate how solar can contribute to a new generation of sustainable projects.

Solar company NRG Energy has developed a new solar canopy which has been installed over a playground at the Dr Martin Luther King Jr School for Science and Technology in New Orleans. The company donated the canopy which is intended to enhance sustainability education for the students and demonstrate the viability of solar PV for a whole range of new and exciting projects.

As part of the launch, NRG hosted a panel discussion on the future of solar power. Jeffrey Sachs, Director of the Earth Institute at Columbia University, was among those attending along with Don Smolenski, President of the Philadelphia Eagles, Matt Petersen, President and CEO of Global Green USA and Laura Spanjian, Director, Office of Sustainability for the City of Houston.

“The new solar installation at the Martin Luther King School demonstrates the applicability and versatility of solar power in urban environments,” said David Crane, NRG CEO and President, who dedicated the new installation alongside the New Orleans Saints quarterback Drew Rees and the school CEO and Principal Dr. Doris Roche’-Hicks. “In addition to reducing the energy costs of the school, the solar panels will provide shade and shelter to students and teachers while on the school grounds.”

NRG has recently championed flagship projects at several key locations including Arizona State University, FedEx Field, the home of the Washington Redskins and various other stadiums across the US. The solar canopy at the school consists of 397 solar panels generating 112kW of power which will be enough to supply one-third of the building’s peak electricity demand. The installation also incorporates playground upgrades and various educational components including fans, drinking fountains, a garden irrigation system, prisms and inspirational quotations.

“More than just a source of energy, this playground will serve as a source of inspiration, education and fun for years to come,” said Dr. Hicks, the school principal.

Posted by solar-magazine.com on Feb 9 2013. Filed under _featured slider, Green Buildings, INDUSTRY, Technology. You can follow any responses to this entry through the RSS 2.0. You can leave a response or trackback to this entry