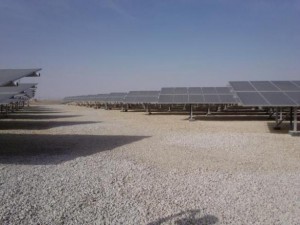 Phoenix Solar says that it has completed the largest open-land solar installation in Saudi Arabia.

The solar farm has a capacity of 3.5 MW and has been constructed on land belonging to the world’s largest oil research centre, the “King Abdullah Petroleum Studies and Research Center” in Riyadh.

On an area of 55,000 m² a total of 12,684 Suntech modules were installed in a construction time of 20 months. They will produce 5,800 MWh of solar electricity annually and thus save 4,900 tonnes of CO2 emissions. The central inverters were supplied by SMA.

In order to combat the expected high temperatures and sand storms, Phoenix Solar placed the generator connection boxes, which are normally in the solar field, in the well-insulated and air-conditioned inverter building.

According to the planners, this measure will enable significantly easier maintenance as well as extending the lifetime of the solar power station.

Ron Shen, Suntech Vice President Asia Pacific, declared that this project is an important milestone for the development of the solar industry in Saudi Arabia. Andreas Hänel, CEO of Phoenix Solar, added: “It was recently announced that Saudi Arabia plans to install 41 GW of solar capacity over the next 20 years. With this first-class reference project we are now well-established here in the region.”

Posted by solar-magazine.com on Feb 8 2013. Filed under _featured slider, INDUSTRY, Solar PhotoVoltaics, Technology. You can follow any responses to this entry through the RSS 2.0. You can leave a response or trackback to this entry