A new wind farm in Austria 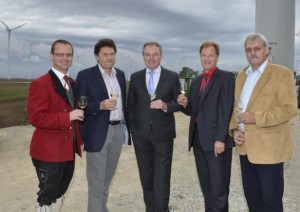 Ten Vestas V90 turbines, each with a hub height of 105 m, rotor diameter of 90 m and a nominal capacity of 2.0 MW comprise the wind farm.

Stephan Pernkopf says that “Gänserndorf District is number one in wind power in Lower Austria. With the new wind farm, the district now has more than 100 windmills in operation. They generate twice as much power as is needed to supply 36,000 households.”

Currently, 377 wind turbines are in operation in Lower Austria, providing energy for 340,000 households. That is more than 11% of Lower Austria’s total electricity udemand.

More than half of all of the wind turbines in Austria are located in Lower Austria.

Posted by solar-magazine.com on Sep 20 2012. Filed under _featured slider, INDUSTRY, Wind. You can follow any responses to this entry through the RSS 2.0. You can leave a response or trackback to this entry