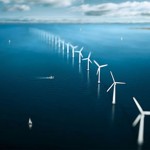 The offshore wind farms are located far out into the sea; they trap winds at faster speeds than they would on land, and also, save up a lot of land space.

The French government of Nicolas Sarkozy has launched a €10 billion ($14.26 billion) tender to build about 1,200 wind turbines in 5 different offshore wind farms.

The offshore wind farms will be located off France’s coast on the North and West and will generate about 3.5% of France’s electricity needs.

Posted by solar-magazine.com on Jul 20 2011. Filed under _featured slider, BUSINESS, Energy Market, Europe, INDUSTRY, Market News, MARKETING, Wind, WORLD. You can follow any responses to this entry through the RSS 2.0. You can leave a response or trackback to this entry