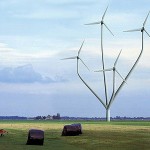 According to the Department of Energy’s, the report investment in terms of how much wind energy capacity was built and connected to the national electric grid.

In U.S. in 2010 were installed about 5 gigawatts’ worth of wind energy farms representing an $11 billion investment, according to the report.

Compare to the 10 gigawatts that were installed in 2009 in the U.S., and the 8 gigawatts in 2008, 2010 represents a decrease in wind energy installations.

“The combination of the delayed impact of the global financial crisis, relatively low natural gas and wholesale electricity prices, and slumping overall demand for energy outweighed the ongoing availability of existing federal and state incentives for wind energy deployment, resulting in a steep drop in capacity additions relative to both 2008 and 2009,” according to the
report.

Wind turbine component manufacturing in the U.S. grew in 2010 and about 68 percent of components used in U.S. wind projects installed between 2009 and 2010 were made in the U.S. 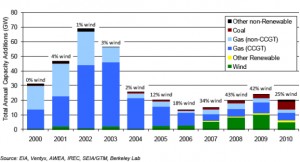 Posted by solar-magazine.com on Jul 15 2011. Filed under _featured slider, Analysis & Features, BUSINESS, INDUSTRY, USA, Wind, WORLD. You can follow any responses to this entry through the RSS 2.0. You can leave a response or trackback to this entry