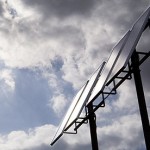 The statistics for the PV market for 2010 released by the Spanish photovoltaic association ASIF, according to which the Spanish PV industry is moving strongly into the international market.

Thanks to the changes in the Spanish solar energy promotion policies and because a yearly cap of 500 MW was set, the international sales in 2010 increased by 130% compared to the previous year.

In Spain itself, 392 MW of new photovoltaic systems were installed, of which a good 60% were locally produced.

2009 was a bad year for Spanish market because subsidies were massively cut and the sales in Spain only reached 17 MW.

However, a large portion of the projects completed in 2010 were actually old projects, the completion of which was delayed by the crisis of the year before.

The ASIF predicts that Spanish solar market will increase more in the coming years, and expects only 300 MW of new capacity to be installed in 2013.

Posted by solar-magazine.com on Jul 10 2011. Filed under _featured slider, Analysis & Features, BUSINESS, Europe, INDUSTRY, Legislation, Solar PhotoVoltaics, WORLD. You can follow any responses to this entry through the RSS 2.0. You can leave a response or trackback to this entry