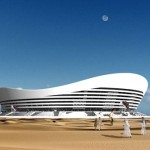 The German architectural firm Stadium Concept has developed a new prototype for the FIFA World Cup 2022 the Floating Stadium.

This amazing construction was developed keeping in view the importance of maximizing the use of financial resources, and also it has an ecological balance.

This floating stadium can be relocated to seaside venues across the oceans.

Unlike traditional stadiums this one comes with highly efficient mechanism of renewable energy systems like the hydro-power, wind and solar energy systems, making it dependent on nature friendly processes to meet its energy requirements.

The floating stadium is structured on multi-levels and it has the base comprises of a floating disk.

The level above would have the stadium access, and will serve as the level of the sports pitch. Around the pitch level, would be the main structure of the stadium bowl, meant for housing the audience.

Above the stadium bowl, would be the stadium roof, which would act as the main cover for the whole structure.

This concept can be transported around the globe, which is a good choice for investors. 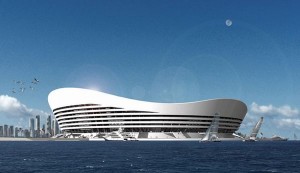 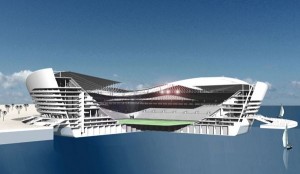 Posted by solar-magazine.com on May 23 2011. Filed under _featured slider, Asia, BUSINESS, Exhibitions, Green Buildings, INDUSTRY, Market News, MARKETING, Technology, WORLD. You can follow any responses to this entry through the RSS 2.0. You can leave a response or trackback to this entry