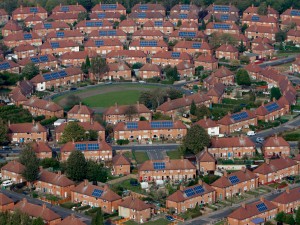 Nottingham, UK: A panoramic picture shows the changing face of an estate after 600 homes had solar panels fitted. Image source.

In 2015, European countries connected around 8 GW of solar power systems to electrical networks, according to estimates by SolarPower Europe.

According to Renewable Energy Focus, demand for solar power systems in European countries increased by around 15% year-on-year, compared to 6.95 GW of new grid-connected solar power capacity in 2014.

“It is good to see the European solar power sector again on the growth path in 2015,” says James Watson, CEO of SolarPower Europe. Peaking in 2011, demand for solar power installations in Europe declined for 3 consecutive years.

Europe’s solar growth in 2015, however, is primarily based on the strong UK market, demand for solar systems in most other countries stayed flat or declined. Watson added, “Solar needs clear signals from policy makers in Europe to be able to contribute to achieving the climate goals agreed in Paris. With solar being competitive for residential and commercial applications in most European countries today, investors need a secure political framework for generation, self-consumption and storage of solar energy.”

Final numbers for 2015 will be presented in a new report in March. Estimates for 2016, including market forecasts until 2020, will be published in SolarPower Europe’s ‘Global Market Outlook For Solar Power 2016 – 2020,’ which will be launched at Intersolar Europe in June.

Posted by roxana on Feb 15 2016. Filed under _featured slider, INDUSTRY, Solar PhotoVoltaics. You can follow any responses to this entry through the RSS 2.0. You can leave a response or trackback to this entry