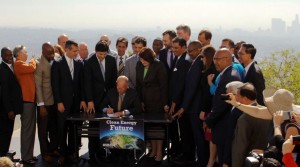 California Governor Jerry Brown has signed landmark legislation requiring the state to get 50 percent of its energy from renewables by 2030. Image via ww2.kqed.org

California’s Governor, Edmund G. Brown Jr., recently signed an legislation committing the state to generating half of its electricity from renewable sources by 2030.

According to energymatters.com, the bill, SB 350, builds on California’s current 33 percent renewables portfolio standard, which was signed into law by Governor Brown in 2011.

“California has taken groundbreaking steps to increase the efficiency of our cars, buildings and appliances and provide ever more renewable energy,” said Governor Brown. “With SB 350, we deepen our commitment.”

Now known as the Clean Energy and Pollution Reduction Act of 2015, the legislation also seeks to double the energy efficiency savings in electricity and natural gas final end uses of retail customers through energy efficiency and conservation.

The Governor had also attempted to implement legislation to enforce a 50% reduction in petroleum use by 2030, but was reportedly defeated by oil interests. California produces around 218 million barrels of crude oil and is the 3rd largest producing state in the U.S. according to the Western States Petroleum Association (WSPA).

“What has been the source of our prosperity now becomes the source of our ultimate destruction, if we don’t get off it. And that is so difficult,” Brown said at a signing ceremony at Griffith Observatory. Images captured at the signing clearly show thick haze enshrouding the city of Los Angeles.

Still, Governor Brown sees today’s signing as a major step forward. His efforts and those of Senator Kevin De Leon have been praised by various groups.

“PSR-LA is committed to continue to work with the Governor, the Legislature, and the California Air Resources Board to make sure SB 350 is fully implemented,” said Physicians for Social Responsibility-Los Angeles (PSR-LA) Executive Director Martha Dina Argüello.

“By increasing renewable energy production and energy efficiency in buildings we can reduce the terrible health burdens caused by our use of dirty energy and fuels.”

The legislation is good news for the state’s solar industry.

According to the Solar Energy Industries Association (SEIA), California installed 4,316 MW of solar electric capacity last year, ranking it 1st in the USA. The state also leads the nation in total installed capacity, with 11.535GW operational.

The SEIA says there is enough solar installed in the state to power 2,891,000 homes.
More than 2,200 solar companies are operating in California; manufacturing products and providing services ranging from solar power system installations to the manufacturing of components used in solar panels.

Posted by roxana on Oct 16 2015. Filed under _featured slider, BUSINESS, USA, WORLD. You can follow any responses to this entry through the RSS 2.0. You can leave a response or trackback to this entry