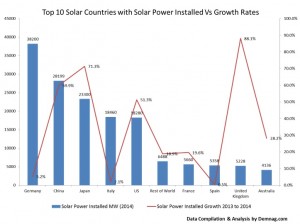 According to new statistics released by Demnag, in the top 10 solar countries who have installed the most solar capacity, Germany leads the pack with 38,200 MW in installed capacity. China comes in the second place with 28,199 MWs & Japan in third place with 23,300MW.

Germany’s top place in the ranking is not surprising given its Energiewende focus to transition away from fossil fuels & its declared war on coal. Here is The Economist’s take on Energiewende:

“Wholesale electricity prices will be 70% higher by 2025, predicts the Karlsruhe Institute of Technology. Germany must build or upgrade 8,300km (5,157 miles) of transmission lines (not including connections to offshore wind farms). Intermittent wind and sun power creates a need for backup generators while playing havoc with business models that justify investing in them. Hans-Peter Keitel, president of the Federation of German Industry, likens the Energiewende to “open-heart surgery”.

But if it pays off Germany will have created yet another world-beating industry, say the gamblers. Alone among rich countries, Germany has “the means and will to achieve a staggering transformation of the energy infrastructure”, says Mark Lewis, an analyst at Deutsche Bank.

While Germany ranks the highest in installed capacity, China has a much higher growth rate 60% & that too with a high base of nearly 28,000 MW. In China too, the government has given solar a high priority in reducing pollution.

Analysts believe that China’s recent announcement of the Cap & Trade policy will encourage a boom in solar power generation infrastructure. This will turn kick of another race to move to solar by other countries such as India.

Posted by roxana on Oct 9 2015. Filed under _featured slider, Analysis & Features, BUSINESS. You can follow any responses to this entry through the RSS 2.0. You can leave a response or trackback to this entry