Japan is turning its abandoned golf courses into solar farms 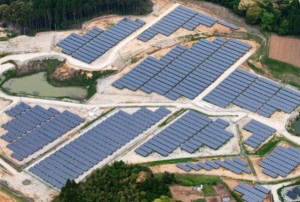 Faced with too many abandoned golf courses, Japan has now turned to transforming them into solar energy plants.

Back in the 1980s, golf courses were huge in Japan. So huge that memberships cost millions of dollars. Not surprisingly, a boom followed in the 1990s and early 2000s, and now…there are just too many of them not being used.

The solution? Well, thanks to Japan’s energy strategy post-Fukushima that now calls for roughly doubling the amount of renewable power sources in the country by 2030, Kyocera and its partners announced they had started construction on a 23-megawatt solar plant project located on an old golf course in the Kyoto area.

According to ecorazzi.com, the project, which is scheduled to be operational in September 2017, will generate a little over 26,000 megawatt hours per year, or enough electricity to power approximately 8,100 typical local households.

And Kyocera is not stopping there. They have plans for a larger project in the Kagoshima area on land that had been designated for a golf course more than 30 years ago but was ultimately abandoned. That project is expected to generate nearly 100,000 megawatt hours per year, or enough to power about 30,500 households.

Apparently Kyocera isn’t alone with this bright idea, and is facing competition from Tokyo-based Pacifico Energy, which is building a 42-megawatt solar plant on an old golf course in Okayama.

But the idea for using solar power plants on abandoned golf courses isn’t remaining in Japan. Plans for similar projects are already underway in the U.S., including New York and Minnesota. And with golf courses already wrecking havoc on the environment, this could very well be their redemption.

Posted by roxana on Jul 9 2015. Filed under _featured slider, Asia, WORLD. You can follow any responses to this entry through the RSS 2.0. You can leave a response or trackback to this entry