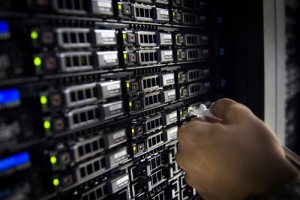 A Greenpeace report charges utilities with hampering efforts to use renewable energy to power data centers needed for services hosted in the cloud. Photo: AFP

A Greenpeace report released on Tuesday accused utilities of hampering efforts to use renewable energy to power data centres needed for services hosted in the cloud.

According to euractiv.com, Greenpeace praised moves made by Apple, Google and other internet titans to fill a skyrocketing demand for electricity with solar, wind or other environmentally-friendly sources but lamented expansion of data centre capacity in places where utilities reliant on carbon-spewing coal fuel dominate markets.

“A growing number of companies have begun to create a corner of the internet that is renewably powered and coal free,” Greenpeace said in its 2015 click clean report.

Internet companies that have committed to being completely powered by renewable energy sources include Apple, Facebook, and Google, according to Greenpeace.

Those commitments have driven growth of renewable power in several key markets, and caused some utilities to invest more heavily in that kind of electricity generation to meet demand, the report stated.

However, some locations that have attracted data centre investments are in markets ruled by utilities with generation powered mostly by coal, gases from which are a culprit in climate change.

“These utilities represent the biggest obstacles to building a green internet, and will require collaborative pressure from data centre operators and other electricity customers to secure the policy changes needed to open the market up to competitors that offer meaningful options for renewable energy,” Greenpeace said.

Apple continued to “lead the charge” in using clean energy to power internet operations even as the California-based company rapidly expanded, according to the report.

Apple on Sunday announced broadened renewable energy and environmental protection initiatives in China, including a project with the World Wildlife Fund to promote responsible forest management.

The forestland project aims to protect up to a million acres of working forests used for fiber for paper and wood products, according to Apple.

The project is expected to generate as much as 80 million kilowatt hours annually of clean electricity, enough to power about 61,000 Chinese homes.

About 87% of Apple’s global operations run on renewable energy, and the Sichuan Province solar farms will move the company closer to 100%, according to the maker of iPhones, iPads, iPods, Macintosh Computers, and Apple Watch.

Google is also pushing to rely on renewable energy, but its progress is under threat by monopolies held by coal-using utilities in some data centre locations such as Georgia, Singapore, Taiwan, and the Carolinas, according to Greenpeace.

Amazon, Microsoft, eBay, and Oracle were among technology giants who scored low grades from Greenpeace when it came to green energy deployment and advocacy.

Increasing demand for data, particularly streaming video, and processing power in the cloud means ramped up demand for power by data centres doing the online work.

“While there may be significant energy efficiency gains from moving our lives online, the explosive growth of our digital lives is outstripping those gains,” Greenpeace said.

Posted by roxana on May 13 2015. Filed under _featured slider, Analysis & Features, BUSINESS. You can follow any responses to this entry through the RSS 2.0. You can leave a response or trackback to this entry