This paper thin battery will charge your smartphone in 60 seconds 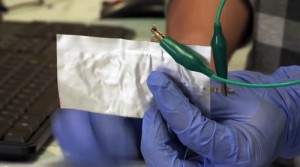 Battery life problems are among the most common smartphone affliction. No matter how power efficient the hardware gets, manufacturers end up using all of it and more for improved displays, faster performance, and more features. Now scientists at Stanford University have come up with an ultra-fast-charging paper thin battery that can be produced on a mass scale. Bonus: the battery can charge your smartphone in 60 seconds.

“We have developed a rechargeable aluminum battery that may replace existing storage devices, such as alkaline batteries, which are bad for the environment, and lithium-ion batteries, which occasionally burst into flames,” said Hongjie Dai, professor of chemistry at Stanford, in a statement. “Our new battery won’t catch fire, even if you drill through it.”

According to Extreme Tech, the aluminum-ion battery contains a negatively charged anode and a positively charged graphite cathode. Researchers placed those two inside a flexible polymer-coated pouch with an ionic liquid electrolyte. Aluminum has always been a compelling material for battery design, but it’s been too difficult to work with. It’s inexpensive, not flammable, and could potentially have high capacities. The problem up until this point, the researchers said, is developing the right materials that could repeatedly produce sufficient voltage after multiple cycles of charging and discharging.

Current lithium-ion batteries in smartphones can take several hours to charge. Some manufacturers like Samsung and HTC have developed fast burst modes that give you 25 percent of initial battery life with just 15 minutes of charging, and have also baked in new slow-burn, emergency efficient modes to eke extra time out of the last few percentage points of battery life. But this new aluminum-ion battery prototype has “unprecedented charging times” down to just one minute. Plus, the researchers were able to charge and discharge the battery 7,500 times without loss of capacity, compared with 1,000 cycles or less for today’s packs.

The researchers said that in addition to phone batteries, the aluminum-ion design could also be used to store extra capacity in renewable power grids, and the two-volt output could also be an environmentally replacement for 1.5-volt disposable AA and AAA batteries.

And that’s where the research continues: That voltage, while better than the disposable batteries, is still only about half that what you need for a smartphone. It’s the last major hurdle, after inexpensive materials, safety, ultra-fast charging, and long life cycle. Here’s hoping they nail it, because at this point we’re all sick of having to charge our devices all the time.

Posted by roxana on Apr 8 2015. Filed under _featured slider, Student, WEB. You can follow any responses to this entry through the RSS 2.0. You can leave a response or trackback to this entry