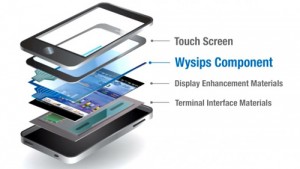 Kyocera is showing a new solar-powered prototype that can also charge anywhere, so long as it’s not too dark or cloudy.

This week at Mobile World Congress in Barcelona, Kyocera is showing off a concept phone that uses its own display to convert the sun’s rays into juice for its battery. While we’ve previously seen devices that harness the sun’s rays via solar cells mounted on the chassis, Kyocera’s prototype employs a transparent photovoltaic layer that can be placed on top of or beneath the touchscreen.

According to Gizmag, the specific technology on display this week comes from a company named Sunpartner, which makes a power-generating display layer called the Wysips (What you see is photovoltaic surface) Crystal connected to a chip that manages and converts solar energy into power that can be stored in the device’s battery.

Sunpartner says Wysips is capable of delivering up to 5 milliWatt-peak/cm2, a figure the company expects to soon double thanks to next-generation photovoltaic materials. The layer is only 0.1 mm thick, making it easy to add to a device without impacting the aesthetic design. The company also claims that it will not impact the the display’s touch capabilities.

While today’s high-powered smartphones won’t likely be able to be self-sufficient on solar power alone, lower power devices like e-readers and more basic phones could theoretically go charger free with this kind of technology. A Tag Heuer watch sporting one of these layers is touted as having “infinite power.”

In the instance of smartphones like Kyocera’s, Sunpartner says its technology could offer infinite standby time so long as sunlight is available. Perhaps the best selling point for those who use ruggedized phones in the field is that the solar power layer can essentially offset the battery drain caused by searching for a network in more remote areas and allow for a reserve of power for emergency calls.

While Kyocera seems to be the first company we’ve heard of demonstrating solar power generated from a device’s screen, Sharp did something very similar several years ago with a solar “lid” for a smartphone, but that never really made it to any markets beyond Asia.

Sunpartner, on the other hand, says its system can work on displays ranging from three to 13 inches, including smartwatches, phones and tablets. For more on the technology, check out the promotional video below.

Posted by roxana on Mar 3 2015. Filed under _featured slider, Gadgets, MARKETING. You can follow any responses to this entry through the RSS 2.0. You can leave a response or trackback to this entry