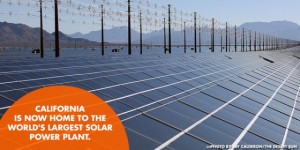 Desert Sunlight received a federal loan of nearly $1.5 billion, and Jewell called its completion an example of the loan guarantee program’s tremendous importance.

“When you are stepping out with new technology, when you are trying something that has been untested before, a loan guarantee program from an organization like the Department of Energy is what provides you, as a lender, that certainty that you can step up and support the project,” Jewell told The Desert Sun.

Conservative lawmakers have derided the loan guarantee program, arguing that it’s wasted billions of taxpayer dollars. Critics have pointed to the program’s $535 million loan guarantee for Solyndra, a Fremont-based solar panel manufacturer that filed for bankruptcy in 2011.

But the Department of Energy reported last year that it expects to make a profit of $5 billion to $6 billion from the program. The department funded five traditional, large-scale solar farms, and Desert Sunlight marks the last of those projects to go online.

“They’re all rock-solid, money is good, living up to every kind of condition we put in the loan documents in terms of performance, in terms of commercial operation,” Peter Davidson, executive director of the Department of Energy’s loan programs office, said in an interview last week.

The loan guarantee program did more than fund five solar photovoltaic projects, Davidson added: It helped launch the large-scale solar industry. In 2009, there were no traditional solar farms in the United States larger than 100 megawatts. Now, 17 such projects have been financed, according to a Department of Energy report released Monday.

Solar panels “existed before as a technology, but that technology hadn’t been deployed at a large scale,” Davidson said. “Once we’ve done that, the government steps aside to let the private markets take over.”

Desert Sunlight employed an average of 440 people during more than three years of construction, and it now has about 15 full-time employees. Money provided by the project’s owners — as part of an agreement negotiated with Riverside County — is also being used to fund $400,000 in improvements to the community center in nearby Desert Center.

Power from the plant will go to Southern California Edison and Pacific Gas & Electric Co.

Desert Sunlight is the world’s largest solar power plant, although only by a hair.

California as a whole has installed more renewable energy than any other state, noted David Hochschild, a member of the California Energy Commission.

“There were a lot of skeptics who actually didn’t believe that renewables could scale, that this cost reduction could happen, that we could introduce it to the grid,” Hochschild said. “They’ve been proven wrong.”

There’s little doubt that California will get more electricity from clean energy in the coming years. The state’s three major utilities are on track to meet or exceed a 33% renewable energy mandate by 2020, and Gov. Jerry Brown is calling for policymakers to increase that target to 50% by 2030.

It’s an open question, though, whether future solar projects will be anywhere near as big as Desert Sunlight.

Developers have been gravitating toward smaller solar farms, which are easier to build and usually have a smaller impact on species and ecosystems in California’s deserts. Desert Sunlight spans 3,800 acres near Joshua Tree National Park, and it faced vehement opposition from environmental activists during its permitting process.

If legislators adopt a 50% renewable energy mandate, it could incentivize massive projects like Desert Sunlight. But Antoun said he’d be surprised to see many more projects 550 megawatts or larger, in California or elsewhere.

“Can we create a bigger project? Of course,” he said. “But it all has to do with how much appetite (states) have for how much land to utilize, and to be committed for 20-25 years.”

Posted by roxana on Feb 11 2015. Filed under _featured slider, USA, WORLD. You can follow any responses to this entry through the RSS 2.0. You can leave a response or trackback to this entry