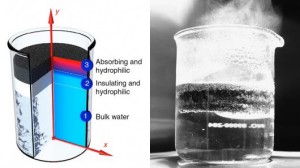 Scientist from the MIT’s Department of Mechanical Engineering report that they have found a way to make a sponge similar substance that is useful for transforming water into steam with the help of sun rays one-hundredth as bright as that requested by classic steam-producing solar power plants. Made of graphite flakes layered on a bed of carbon, the new substance is said to transform 85% of the harvested solar power into steam.

From the practical point of view, researchers believe that the graphite flakes and carbon foam combination they made can insulate a material structure that can float on water. They have developed several experiments and believe they discovered a method to raise the heat withholding properties in the upper layer by expanding its volume. They experimented this in a microwave. The outcome is exceedingly permeable top layer able increase absorption and withholding of solar energy.

The layer on the bottom is designed from carbon and it contains hundreds of tiny pockets of air that helps the material floating, and meanwhile it is insulating in order to prevent the heat from going out. The essential fact is that for the steam generation, the foam is also perforated with small pores the give permission to the water to go back up.

So, when the light from the sun illuminates and heats the material it gives pressure to the foam and air and helps the water to get pass the carbon and go into the graphite layer. As this takes place, the heat on the materials turn water into steam. As a result, if the light is more intense, the quantity of water absorbed is higher and more steam is generated.

“Steam is important for desalination, hygiene systems, and sterilization,” says Hadi Ghasemi, a postdoctoral MIT student who ran the material development. “Especially in remote areas where the sun is the only source of energy, if you can generate steam with solar energy, it would be very useful.”

Scientists also say that the sponge-like material can be made from cheaper material and can be the beginning of a new type of compact, steam-powered applications, especially as this method gives a significant improvement over classic solar-powered steam generation methods.

Posted by roxana on Jul 24 2014. Filed under _featured slider, INDUSTRY, Solar Thermal. You can follow any responses to this entry through the RSS 2.0. You can leave a response or trackback to this entry