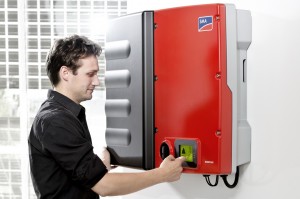 This new product awarded the Product Innovation Prize at Intersolar 2013 is currently the simplest storage solution available for typical residential PV applications. Furthermore, it can also be used as part of the SMA Integrated Storage System Solution.

With the Sunny Boy Smart Energy, owner-operators can now use solar power even after sunset. Thanks to the integrated battery with a capacity of approximately 2 kWh, generated PV electricity that is not needed in the home can be stored for later use. This increases self-consumption—which makes a positive contribution to the environment and great sense financially—and therefore independence from rising electricity prices. “When combined with the Sunny Home Manager, self-sufficiency quotas of 50% are common on an annual average basis,” said Product Manager Thomas Thierschmidt.

The VDE-certified lithium-ion battery integrated in the Sunny Boy Smart Energy has an effective, application-oriented capacity of approximately 2 kWh. This value is crucial because it enables ideal economical operation of the battery. Because the increase in self-consumption levels off with increasing storage capacity, the battery utilization factor decreases. In addition, thanks to the battery, virtually all generated PV energy can be used, even with active power limitation. “Our long-standing expertise in storage systems shows us time and again that the small storage battery is not only extremely viable but also affordable,” said Thierschmidt.

A core component in the SMA Integrated Storage System

The Sunny Boy Smart Energy, which is available in power ranges of 3.6 kW and 5 kW, is one of the core components of the SMA Integrated Storage System alongside the Sunny Home Manager. As the first wall-mountable, mass-produced PV inverter with an integrated lithium-ion battery, this new product awarded the Product Innovation Prize at Intersolar 2013 is currently the simplest storage solution available for typical residential PV applications.

For greater independence, for the success of the energy transition

The Sunny Boy Smart Energy fosters greater independence in the scope of the intelligent energy management of SMA Smart Home. It is also perfectly designed to help fuel the energy transition, thanks to its storage function. “The future Smart Grid for the decentralized and renewable electricity supply must rely on electrical storage systems. To be able to establish a system-appropriate storage capacity within the utility grid capacity, an easy-to-install and affordable product is needed. In this respect, the Sunny Boy Smart Energy supports the energy transition unlike virtually any other device,” said Thierschmidt.

The SMA Group generated sales of €932.5 million in 2013 and is the global market leader for solar inverters, a key component of all PV plants. As an energy management group, SMA offers innovative key technologies for future powersupply structures. It is headquartered in Niestetal, near Kassel, Germany, and is represented in 21 countries.

Posted by lavi on May 6 2014. Filed under _featured slider, BUSINESS, Energy Market, Europe, Market News, MARKETING, Solar PhotoVoltaics, Technology, WORLD. You can follow any responses to this entry through the RSS 2.0. You can leave a response or trackback to this entry