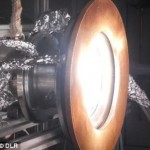 The project is called Solar-Jet and it exploits the sun for heating metal oxide. After that, 700 °C water and carbon monoxide go into the reactor. This leads to the creation of a synthetic gas that combines of hydrogen and carbon monoxide. The final step is the compression of that and the conversion into a fuel that imitates kerosene.

If this works on a bigger scale, it can lead to a source of sustainable and ascendable supply of fuel for planes, cars and some other vehicles.

With the purpose of reducing toxic emissions, Europeans created the first renewable jet fuel that works on water and carbon dioxide

If this is proved on a larger scale, this project could mean a new beginning in the renewable energy industry by making possible an on-demand reserve of fuel that are used in planes, cars and other different type of vehicles.

The achievement was made public by the researchers that have been working on the Solar-Jet project for the past four years and spent the last years developing a solar reactor that utilizes focused sunlight to heat up metal oxide.

The renewable jet fuel could be useful to planes, cars and other vehicles

“The basic idea is to reverse the combustion process. What we do is take carbon dioxide and water vapour, and introduce energy to produce fuel” said the person in charge of at the DLR Institute of Combustion Technology in Stuttgart, Patrick Le Clercq, according to dailymail.

The fallowing step is the compression. After that the gas is sent to Shell, where it is converted into a hydrocarbon fuel that is a lot like kerosene during a process called Fischer-Tropsch.

“This large-scale method is already in widespread use throughout the world and has been certified for aviation purposes. This means the fuel produced using this technique will not need to undergo any new, extensive testing and certification procedures,” added Le Clercq.

The project is currently at the experimental stage and only has a glassful of jet fuel produced in laboratory conditions that use simulated rays. Still, scientists think that this could represent a way cheaper and environmentally-friendly fuel.

Posted by admin on Apr 30 2014. Filed under _featured slider, Energy Market, Europe, Market News, Solar PhotoVoltaics. You can follow any responses to this entry through the RSS 2.0. You can leave a response or trackback to this entry