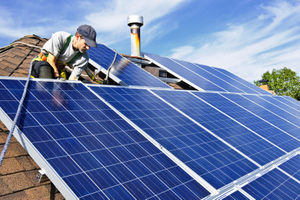 Solar costs the same as conventional

European PV has reached a point where the green power costs the same as conventional power in countries like Germany, Italy and Spain. This is shown in a report that also says that the fact that stops other countries to be in the same position is the high installation costs.

Solar energy is as profitable as conventional power

The form Eclareon made an analysis made in the interest of international group of sustainable energy interests. The study shows that solar energy joined the energy market. This means that solar is no longer much more expensive than conventional light. On the contrary, clean energy has reached the point where solar energy is at the same price as Italy, Spain and Germany
Still, the report also shows future prospects in Spain are not so good as the poor regulations could constrain the progress.

“In countries such as Italy and Germany, both at grid parity and with proper regulation, PV systems (photovoltaic system) for self-consumption represent a viable, cost-effective, and sustainable power generation alternative,” are David Pérez’s word, partner at Eclareon in charge of the study.

Researchers analyzed a 30 kilowatt solar power system regarding the leveled cost of energy. This includes installation, maintenance, depreciation and investment.

Eclareon also analyzed the LCOE of solar power in Brazil, Chile, France, Germany, Italy, Mexico and Spain. The report says that LCOE is smaller in the past years, even if the drop was less big in well-developed countries such as Italy, Germany and Spain. Progress in Brazil, Chile and Mexico is still impeded by high installation costs.

The rise of solar in Germany is based on the fact that the country stopped its support for nuclear energy since the unfortunate events in Japan. Two years ago the country was producing a record of 22 gigawatts of power that is about 50 percent of the nation’s power quota.

“Never before anywhere has a country produced as much photovoltaic electricity. Germany came close to the 20 gigawatt (GW) mark a few times in recent weeks. But this was the first time we made it over,” Norbert Allnoch told Reuters news agency.

Posted by admin on Mar 28 2014. Filed under _featured slider, Energy Market, Europe, Market News, Solar PhotoVoltaics. You can follow any responses to this entry through the RSS 2.0. You can leave a response or trackback to this entry