London is hosting the biggest solar-powered bridge in the world 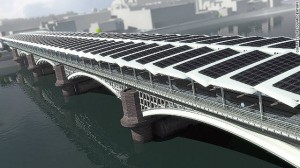 After almost half a decade the bridge was opened ceremonially yesterday at at Blackfriars Bridge across the River Thames.

The bridge is part of Solarcentury’s project and the top of the the roof of the bridge was covered with 4,400 photovoltaic panels, and it provides up to half of the energy for London Blackfriars station.

The platform is said to reduce the stations carbon emissions by an estimated 511 tonnes a year, and above all to further reducing the carbon of its train routes to the south east of England.

David Statham, managing director of First Capital Connect stations, reported “Electric trains are already the greenest form of public transport – this roof gives our passengers an even more sustainable journey.The distinctive roof has also turned our station into an iconic landmark visible for miles along the River Thames.”

The solar bridge bridge also fulfills London’s purpose to become a more sustainable city. The advertisement for this is the bridge itself as it is viewable from the entrance of the city.

The project itself made by Solarcentury was one of the most complicated project even for them, as company installed the panels in a series of phases over the past two years, and took a break only to minimise the impact on the station during the 2012 Olympic Games.

“We had different sections of roof available at different times to fit in with this complicated jigsaw of getting everything up and going,” says Gavin Roberts, Solarcentury’s senior project manager. He also said that the company even considered to bring some of the components in via the Thames.

Posted by admin on Jan 23 2014. Filed under Market News. You can follow any responses to this entry through the RSS 2.0. You can leave a response or trackback to this entry