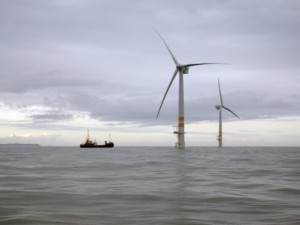 EnBW Baltic 2 is being developed by German company EnBW Erneuerbare Energien GmbH and the funding deal was signed this week in Karlsruhe.

The wind farm consists of 80 wind turbines installed within an area of 27 square kilometres, 32 km north of the island of Rügen. This is a particularly demanding location for an offshore wind farm because the sea in this area can be as much as 44 metres deep in some places requiring the use of special foundation structures called ‘jackets’.

Nevertheless, EnBW Baltic 2 has a capacity of some 288 megawatts and will generate an annual output of 1.2 billion kWh, enough to supply 340,000 households while achieving emissions savings of around 900,000 tonnes of carbon.

“Demanding projects are required so that Germany can implement its ambitious energy aims” said Wilhelm Molterer, the Vice President of the European Investment Bank.

“EnBW Baltic 2 sets standards. It will be exemplary for future projects of this magnitude. With the financing that has now been agreed, it will be possible to implement the extensive project quickly and make a decisive contribution to the success of the energy transition.”

The turbines used in the project are Siemens SWT-3,6-120, 39 of them erected on monopoles with another 41 using jackets.

“The commitment of EIB to a project like EnBW Baltic 2 makes a very essential contribution towards the energy transition” said Thomas Kusterer, the Financial Chairman of EnBW Energie Baden-Württemberg AG. “Participation of the EIB in such projects represents a decisive element in structuring and financing.”

Posted by solar-magazine.com on Jan 14 2013. Filed under _featured slider, INDUSTRY, Technology, Wind. You can follow any responses to this entry through the RSS 2.0. You can leave a response or trackback to this entry