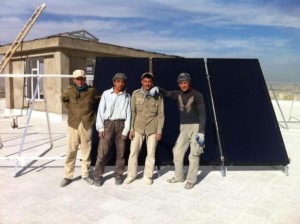 Many hours of sun at consistently low temperatures: The winter in Afghanistan is predestined for the use of solar heat.

The German collector manufacturer REM, Rottenburg/Laaber, has now delivered the first solar thermal system for a multiple dwaelling with 20 flats in Kabul – the beginning of a series of contracts for a total of 21 systems, which will be installed in Kabul and the surrounding area. Solar Sky GmbH in Kassel was in charge of project planning and construction of the system, consisting of 20 collectors and a 3,000 litre tank.

The private builder in Afghanistan hopes to find a solution to support heating during the cold season by the use of solar thermal energy. “The winters in Kabul are similar to those in Germany. There are four months in which the average temperature falls below freezing,” according to the solar expert Assghar Mahmoudi from Solar Sky. Measured in kWh/m², however, the amount of solar energy there is two or three times higher than in Germany.

“In Afghanistan there aren’t any real heating systems. Because of the frequent power failures, reliable heating for housing is quite difficult,” explains Mahmoudi.

The collector system is now being installed and, augmented by a gas fired boiler, will supply energy to heat drinking water and rooms in the future.

Posted by solar-magazine.com on Dec 18 2012. Filed under _featured slider, INDUSTRY, Solar Thermal, Technology. You can follow any responses to this entry through the RSS 2.0. You can leave a response or trackback to this entry