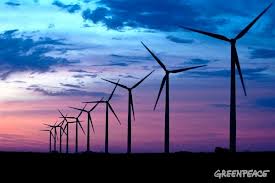 That’s a very large amount of electricity, enough to power a small city.The recent announcement shows that with a forward-thinking approach, large companies can make significant contributions to the transition to a renewable energy economy.

“To power its Oklahoma data centre – one of the facilities responsible for bringing you your Gmail, Docs, and Google search results – Google faced a local electricity mix of over 50% coal power,” Greenpeace writes. “But as one of the major electricity customers in the state, Google worked with the local utility to secure a new supply of renewable wind energy.”

Google’s decision to source the electricity for its data center entirely from renewable energy should send a message to other large “internet companies and electric utilities around the world that renewable energy is not only possible, but is simply smart business in the 21st-century economy,” Greenpeace adds.

Posted by solar-magazine.com on Sep 30 2012. Filed under _featured slider, INDUSTRY, Wind. You can follow any responses to this entry through the RSS 2.0. You can leave a response or trackback to this entry