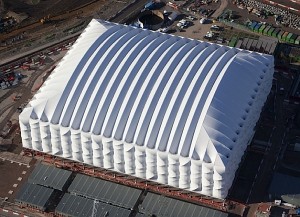 Since the Olympics draw a huge number of international visitors, building such arenas is something of a necessity.

However, to level the proverbial playing field for countries with a slightly lesser budget, designers Wilkinson Eyre and Sinclair Knight Mertz have created a basketball arena that is not only budget-friendly for the organizers but also a lot greener than most of the 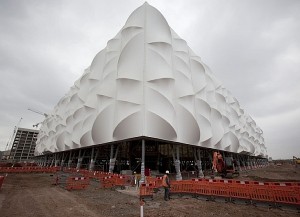 The 2012 London Olympics Basketball Stadium project was created in collaboration with sports consultants KSS and as its name signifies, it would be used to organize the basketball competitions in this year’s Summer Olympics.

Built using 1,000 tonnes of steel, the design is neither very cheap nor 100 percent green 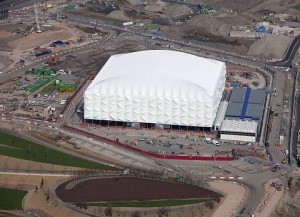 but it certainly presents a great case for the incorporation of more sustainable designs for events of the same structure and crown attendance as the Olympics. Clad in white, the basketball stadium is made up of recyclable materials that can be reused.

For now, the 2012 London Olympics Basketball Stadium is a one of a kind project though members of the Olympics organizing committee as well as interested host nations agree that such sporting arenas could potentially bring the Games to nations with a little less spending power and provide a boost to their economies simultaneously making the Olympics greener.

Posted by solar-magazine.com on Jul 29 2012. Filed under _featured slider, Green Buildings, INDUSTRY. You can follow any responses to this entry through the RSS 2.0. You can leave a response or trackback to this entry