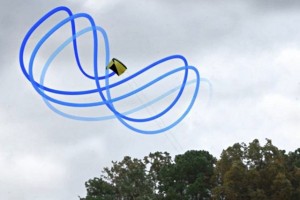 Benjamin Franklin uncovered ground-breaking facts about the nature of electricity and lightening by flying a kite in 1752.

Two and half centuries hence, NASA is using the lowly kite yet again albeit this time the purpose of the experiment is to change the way the world approaches wind turbines and sustainable energy generation.

Wind-borne power systems may not yet be viewed with the same level of trust as land-based tower-like wind turbines but they may just prove to be just the viable and ingenious alternative that can bring wind energy to the masses.

Engineers at NASA are currently hard at work trying to develop the model which explores two facets of the technology. The first is a generator based on the ground which the kite is tethered to and is powered by the reeling motion of the kite as it is activated by the wind. The other part of the project focuses on generating electricity via a set of turbines built into the kite itself.

During the reeling phase, the wind-borne wind power system uses 10 percent lesser energy which makes the model almost 90 percent effective. The model generates more  electricity when wind turbine blades are further from its hub and spin faster offer further advantage to the airborne system over the land-based systems. To allow the kites to maintain their orientation and speed, the system comes with a Microsoft Kinect-like pattern recognition software that also helps establish the situation of the kite. The kite is maintained in a figure-eight flying pattern by a flight-control system.

At the moment, NASA is working on a prototype in which the kite will have a wingspan of over 10 feet. The agency is also seeking permission to test the prototype  airborne wind-power system at an altitude of 2,000 feet above sea level which is supposed to be the right elevation for such systems. If perfected, the technology would not only provide clean power to people on the planet but perhaps also to human settlers and exploration probes on Mars and other planets in the solar system.

Posted by solar-magazine.com on Jul 8 2012. Filed under _featured slider, Technology. You can follow any responses to this entry through the RSS 2.0. You can leave a response or trackback to this entry