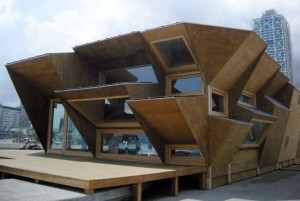 Solar House 2.0, is a rare structure that adopts to maximize the renewable energy potential of its location.

Made by the Institute of Advanced Architecture for Catalonia (Iaac), it has a modular facade covered with protrusions that support additional solar panels.

Protrusions are designed to creatively maximize the use of energy, also they absorb the sun’s energy independent of the seasons.

The building is capable of generating almost 100kWh of electricity and its average daily consumption stands at 20kWh.The roof alone features 150sq m of photo voltics.

During summers, the protrusions form a barrier when the sun tracks higher across the sky, whereas during winters it allows the sun’s rays to directly penetrate.

The house has been constructed from wood due to the fact that wood is an inexhaustible material that is soft and easy to work with and also it can be molded and adapted to provide warmth and insulation.This building looks more like a huge log cabin, suitable to belong to the Scandinavian woodland.

Posted by solar-magazine.com on May 29 2012. Filed under _featured slider, Green Buildings, Solar PhotoVoltaics, Technology. You can follow any responses to this entry through the RSS 2.0. You can leave a response or trackback to this entry